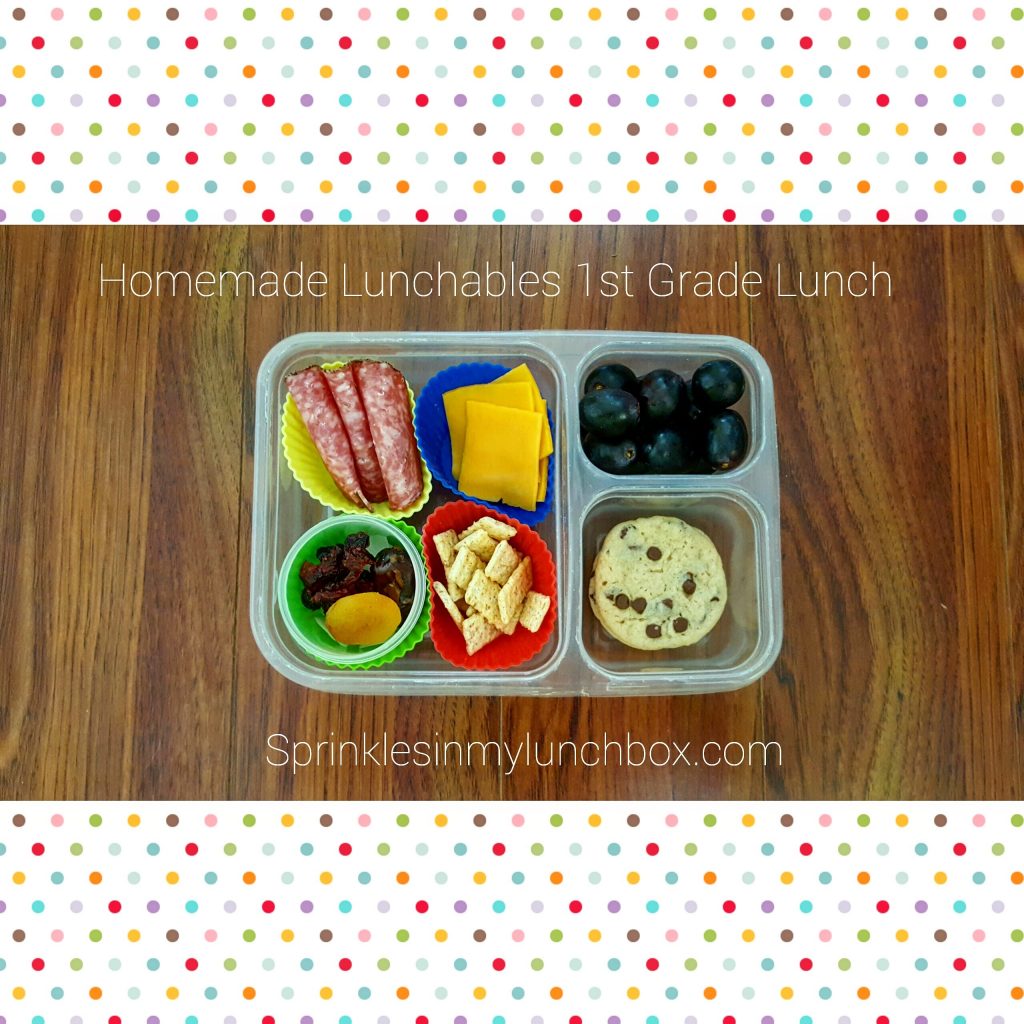 Have you ever heard of Fairy Bread? It’s this magical dish served at parties in Australia and NZ, where slices of white bread are slathered with butter and liberally covered with nonpareils (or hundreds and thousands, as they’re known as there), and cut into triangles. This is my take on it. I made sunbutter and strawberry jam kebabs and turned them into Fairy Bread kebabs. It’s Friday. It’s time to celebrate. It’s the end of the week. We made it!! I also packed orange flavored dried cranberries, oyster crackers, red grapes, gingerbread muffins, and peas and carrot mallow candies…because PEAS AND CARROTS CANDY!!! They were one of my favorite candies growing up. I’d spend my allowance on those things at the mall candy store. Along with sour peach gummy rings, sour gummy belts, Jelly Bellies, licorice, Warheads, gummy sharks, gummy colas, and pretty much anything else I could get my hands on. I digress.

Tomorrow is Wednesday. The week is half over. I’d call that a victory. 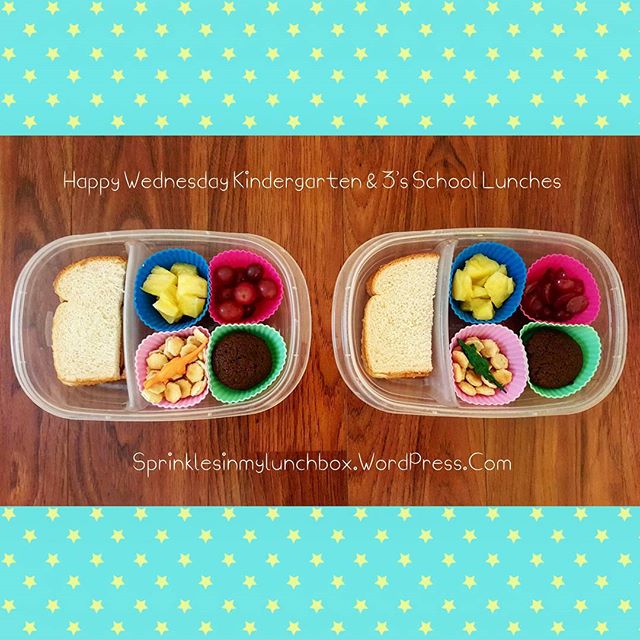 I made sunbutter and raspberry jam sandwiches. I also packed pineapple, red grapes, oyster crackers (with dinosaurs walking in them), and gingerbread muffins.

Well, oopsie poopsie, I haven’t posted lunches in….um, a while! During Christmas break, we were so busy doing fun activities, okay, surviving, we didn’t so much do fun lunches. We ate. Square sandwiches. But, now I’m back.

So here are two fun lunches I did (amongst MANY others, I can assure you 😉 ).

I packed pizza, chips, oranges, grapes, blueberries (for Bigs), and frosted brownies for dessert. These are all things I’d like to have at a slumber party. Wouldn’t you?

For the brownies, I used this recipe:

And for Bigs’ lunch tomorrow, I went with a deli(ish) theme. I made a sunbutter & jam sandwich. I also packed Cheez-Its, pickles, a mandarin orange, a gingerbread muffin, and a chocolate coin. I’ve never actually had any of this at a deli, but whatever.

So yesterday, I got busy in the kitchen. I made three things, that when put together, would make quite a party in the lunchbox!

I started with homemade fruit snacks. I’ve made these many, many times before. They are easy and healthy. MUCH more healthy than store-bought fruit snacks (which I won’t judge if you eat them – we do sometimes too!).

They only have a few ingredients – frozen (or fresh fruit), honey, orange juice (I use concentrate with water), and gelatin.

Here is the recipe (feel free to use the fruits you love!):

My Bigs loves these. My Smalls doesn’t adore the squishy feeling. The taste is so much cleaner than the over-processed ones.

I also made pizza rolls. I didn’t follow any recipe, but made it up as I went along. These were also very easy, only using four ingredients, as well. I rolled out the crescent rolls and used a rolling pin to flatten them. I spread around a few tablespoons of pizza sauce, sprinkled some cheese, and scattered some mini pepperoni. I then rolled up the dough, like I would cinnamon rolls. I placed the rolls in the fridge for a while, so they wouldn’t be too gooey when slicing them.

Once chilled, I sliced them and put them in a greased cake tin and baked for about 20 minutes.

My house smelled like a pizzeria! They came out golden brown, ooey, gooey, melty, cheesy, saucy, and pizza-y.

I think they’ll be a hit.

These are the perfect size for small hands and lunchbox treats! I can’t wait for my Bigs to be able to have these in his lunchbox (good behavior is the key to getting these).

They are DELICIOUS – slightly chewy, soft, a bit underdone…and best of all, adorably little.

Get in my belly, a thousand of you!!!

Here is the recipe, if you are interested (and why wouldn’t you be?): Today has been a busy day. It isn’t even nearly over. I guess the days seem long because my boys get up so early. I am always pooped by lunch time.

After the boys woke up, we made Banana Kale Smoothies. Or “smoozees”, as they call them. Bigs helped me.

After our smoozees, we went for now our-usual jog early this morning. So far (crossing my fingers), the boys haven’t tried to escape their jogger seats yet, and they’ve been pretty good. I’ve only had to stop and get on their case for brotherly-arguing about three times since I’ve started jogging consistently. 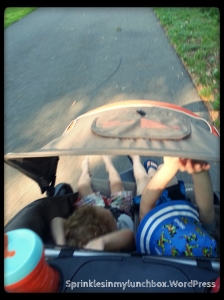 Today they were squealing with delight and throwing up their hands. I know I’m not jogging fast enough for them to feel like they are on a roller coaster!

When we got home, I set up a little sensory playtime for them. I’d remembered that one of Bigs’ favorite activities in school was  playing with shaving cream. So, the last time I was at the Dollar Store, I bought a few cans. Today I set them out with some Tupperware and whisks.

Bigs loved it, obvi. Smalls did not. I thought he would, but I should have guessed. Despite being so wild and cray cray, he does not like messes on his hands and body, with the exception of food on his face. That, he never seems to mind or notice. Oh well. Scaling the walls, climbing on table tops, eating out of the trashcan, and running amok will have to suffice for Smalls entertainment. I think he’ll be okay.

Whenever I make lunch for the boys, I end up feeling like a piece of meat, with vultures surrounding me, pecking, and ravishing my personal space. I cannot keep them from getting all up in my face while preparing their meals. Today, I gave them a few pieces of frozen corn to much on while waiting. I did not expect it to turn into their favorite snack ever. They both loved it and ended up eating around a 1/2 cup each.

What a fun discovery for me! I hope they’ll continue eating it. I think it makes for an almost refreshing, and certainly healthy, “treat” (usually I serve corn warm for them).

I made another salad for myself. It was divine. It was a BBQ Picnic Salad. Doesn’t that look incredible? My Mom is a master baker. She’ll deny it, but she is. And she made these. AND the Chocolate Pear Jam (am I the only one that thinks of Pearl Jam when I see ‘pear jam’? I love 90’s grunge, what can I say!) next to it. I know. I’m wicked blessed (for many reasons other than the buttery pastry and jam).

It’s good to be back in some routine (as you might recall I’m a fan of), although now my Husband is sick. Seriously. I thought we were done with this! I just hope the cycle ends with him. Once and for all. Seriously. Go away, Sickness!

Despite that, we’ve been doing great at focusing on the Simple Things.

We had a Game Night, where we played Disney Candyland. It is always a fun game, but was made more special with popcorn. Bigs goes ape poop for popcorn. He always has. It was pretty fun except Smalls kept sweeping his hand through all the player pieces and cards. And the popcorn. 18 month olds aren’t good at playing games.

We had an Art Night, where we got out this huge pad and everyone drew on it. It was great. We love doing that. I cannot even handle how much I love Bigs’ happy face drawings (bottom right, middle of page). He’s just the coolest. Literally The Coolest.

Know what else is cool? Pretzels. Homemade pretzels. I made some. Sure they ended up looking like chicken wings. But chicken wings are cool too, right?

The dough was really easy to make and came together well.

It was sticky though. And that didn’t make for very clean pretzel forming. But that’s okay. It’s not like they ever had the destiny to LOOK good. They were supposed to be like pretzel nuggets but since the dough was too sticky for me (and I had two crazy boys running amok), I just sort of cut it and some had tails and looked like sea monkeys and some were cute and others were wonky. And I didn’t score any but one (the one that made me make the decision not to score the rest). They went into their baking soda hot tub and floated to the top.

I piled those suckers up and added an egg wash. Okay, not an egg wash, but just a beaten egg (before EGG above, after egg below). Oops. They stunk a bit when baking.

They baked up beautifully though, and the eggy smell went away. I brushed melted butter on them after they were done baking (before butter above, after butter below).

They were just like “real” soft pretzels! Crunchy(ish) outside, delicious and chewy inside. They look like those Snyder’s Honey Mustard pretzels here. They aren’t. Some I tossed with Kosher salt.

Don’t they look like the best ever chicken wings? Well, they’re not.

The other half of them I added cinnamon sugar to.

That was more of a hit. But I like pretzels in any flavor.

Look at all those glistening, delicious pretzel nuggets.

I also made some delicious roasted sweet potatoes for dinner. I had both white and orange sweet potatoes (The black ones appear to be purple sweet potatoes, but they’re not. They burned. But I did that ON PURPOSE because my husband loves burned stuff. Works for me.). I served those with sausages and fruit.

And lastly, to round out this very wonky post, today was Fireman day at Bigs’ school.

Here is his cool lunch. It’s a PB&J (duh), with “F I R E   D E P T” stamped on it and red, orange, and yellow outlining to represent fire. I made a little construction paper fire for him with directions on it, saying, “Put this fire out with your pretzel “hoses””. I also gave him a few more red tortilla chips. And lastly, he had cherry yogurt raisins, orange yogurt raisins, and some dried pineapples and bananas (all keeping with my red, orange, and yellow theme).

And naturally I had to send him in matching clothes. It’s how I [stop, drop, and] roll. I can’t help myself. It’s some sort of a sickness.

I hope you all have had a great Thursday. It’s one step closer to Friday – woohoo!